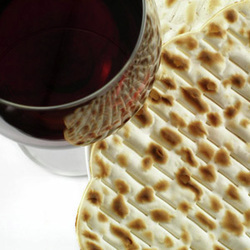 Jesus was a historical person who lived in the region north of Jerusalem called Galilee approximately two thousand years ago.  At the time, the Middle East was occupied by the super-power of its day—Rome.

Jesus was born and raised a Jew, and identified with the covenant God made with Moses and the people of Israel.  The center of the Jewish faith at this time was the temple in Jerusalem, where an advanced sacrificial cult made daily  offerings to God.  Jews from around the world would make pilgrimages to Jerusalem during important festivals such as Passover, which commemorated the liberation of God’s people from oppression and slavery in Egypt.

Jesus spoke in Aramaic (a Semitic language related closely to Hebrew) and likely apprenticed in his adoptive father’s building trade.

As an adult, Jesus left  his home in Nazareth and became an early follower of John, a rowdy prophet who called people to reenact the great exodus from Egypt by baptism in the Jordan river.  John preached repentance—personal transformation from sin and ungodliness—as a way to prepare for the coming of God’s judgment, when the injustices of the world would be set right.

John was arrested for challenging publically the lax morality of the puppet king, and was soon executed.  By this time, Jesus had begun to call disciples of his own, and to proclaim a radical message:  the reign of God is here.

Jesus led a program of itinerant preaching and healing throughout the Galilee and Judean regions.  He attracted countless followers, and from among them called twelve men in particular to be disciples—students who would thoroughly learn their rabbi’s teaching and follow his example. The number twelve was reminiscent of the original sons of Jacob, the twelve tribes of Israel.

As a result of this message, Jesus was a friend to people who were typically on the margins of polite society—sinners, tax collectors, foreigners, lepers, prostitutes—which resulted in no little controversy.  Jesus even counted women among his close followers, a radical and controversial act in that day and place.

Jesus often taught in parables—riddles or stories that used common, ordinary images to reveal divine or profound truths.  For example, ‘The reign of God is like a treasure you find hidden in a field.  What do you do?’

Jesus’ teaching was coupled with action—healing the sick, giving sight to the blind, helping the lame to walk, and even raising the dead.  What’s more, Jesus was able to still violent storms, exorcise demons, and feed thousands of people at one sitting with just a handful of bread and fish.

Jesus’ fame as a wandering rabbi and miracle worker spread quickly. Many began to regard him as the messiah, the heir to the throne of David who would liberate Israel from Rome and begin a new era of peace.  Messiah is a Hebrew title meaning ’anointed one’  (Christ means the same in Greek).

As the Passover festival approached, Jesus and his followers were welcomed into Jerusalem with accolades.  He taught in the temple precincts and the neighboring villages. At one point Jesus even caused a riot in the temple’s currency exchange. He soon caught the attention of both the religious establishment and the Roman authorities, both of whom were keen to keep the peace during such a volatile time.

Sharing in the Passover supper with his closest disciples, Jesus used the imagery of the festival to announce a new exodus of God’s people.  Taking the bread and wine, he declared that through him God was establishing a new covenant—one of forgiveness of sin and freedom to love God and love one’s neighbor.

Within hours, Jesus was betrayed by one of his friends, arrested for insurrection and sedition, tortured by Roman soldiers and hanged to death on Rome’s favorite form of public execution—the cross.

Jesus’ body was hurriedly sealed in a tomb, and his followers were dismayed and embarrassed at this unimaginable turn of events.  But on the third day after his death, Jesus appeared again to his disciples—risen, resurrected, renewed from the grave.  The victory of God in Jesus wasn’t over Rome, but victory over death itself.

Jesus’ disciples were overcome with the vision of their rabbi resurrected from the grave. They were empowered by God’s own spirit to go and call and train disciples of Jesus throughout the world—not just within Israel but everywhere.  Under God’s reign, the walls that separate us one from another are demolished.

Jesus’ followers found that in their teacher God was encountered in a unique way.  They discovered that God’s word—which brought the world into being, which called Abraham and Sarah, which was revealed through Moses and the Torah—had literally become human in the rabbi known as Jesus. This word-in-the-flesh was God’s way of meeting humanity face to face, sharing our joys and sorrows, even birth and death.

And so, we are Jesus people.  We are followers, students, disciples, of our savior who teaches us how to love God and how to love our neighbor, and calls us to be his own hands and feet in the world today, teaching, healing, forgiving, and loving.  After all, the reign of God is here.

What’s in a name?

Jesus’ life and teachings are found in the first four books of the New Testament, called Gospels, written in the first century of our common era.  Each Gospel gives us a different angle on Jesus’ story—Matthew casts Jesus as a new Moses; Mark describes a messiah on an urgent mission; Luke pays particular attention to Jesus’ identification with the outcast and unloved; and John describes Jesus as the fullest expression of God’s word.